Okinawa Prefecture is in a central location, as it connects mainland Japan, Mainland China, and countries in Southeast Asia. For this reason, it is an attractive place for engaging in business in Asia and Japan.

Okinawa Prefecture has a subtropical oceanic climate, and is blessed with a warm climate all year round. You can spend quality time during your holidays while surrounded by a blue ocean where coral reefs grow and by a rich natural environment. 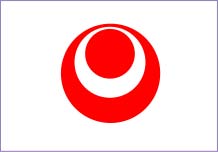 The outer circle of this symbol represents the ocean. The white part is an “O” (for Okinawa), and symbolizes Okinawa as well as the harmony between people. The inner circle symbolizes an actively and globally developing Okinawa. In short, the mark symbolizes "the ocean," "peace" and "development." 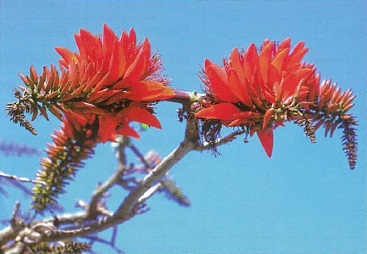 Prefectural flower: Deigo (Indian coral bean)
Erythrina Orientalis
The Deigo tree, originally from India, is a deciduous broad-leaved tree that belongs to the pulse family. During the period between March and May, the glowingly beautiful, deep red flowers bloom in racemes along the length of the spray, to the very end of the branches. The deep red flower is an appropriate symbol for the southern islands that make up Okinawa, and plays an important role in promoting tourism. Furthermore, the Deigo tree is valuable financially and for making crafts, as its trunk section is used as material for traditional Ryukyuan lacquerware. These were the main reasons why the Deigo was chosen as Okinawa’s prefectural flower. (Designated in 1972) 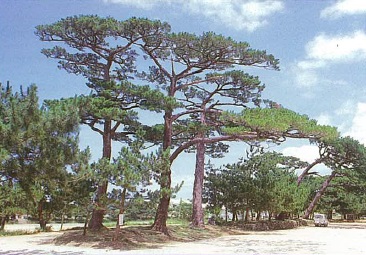 Prefectural tree : Ryukyu Matsu (Ryukyu Pine)
Pinus Luchuensis Mayr
A full-grown Ryukyu Pine, which is endemic to Okinawa, can reach a height of 15 meters. As the tree gets older, the crown spreads out, and the tree shows gracefully-shaped branches. The Ryukyu Pine is widely used as roadside trees, ornamental trees, bonsai, and windbreaks. It also has economic benefits, as it is very easy to propagate. For these reasons, the Ryukyu Pine was chosen as the prefectural tree. The Government of the Ryukyu Islands declared the tree as its prefectural tree on February 7th, 1966. (Designated in 1972) 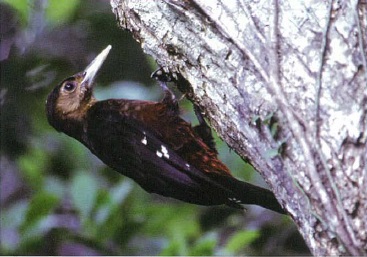 This is a globally rare species and is the only member of a single-species genus of woodpeckers. It makes its habitat exclusively in the northern part of Okinawa Island. It has been designated as a natural treasure of Japan. This species was discovered by a British man in 1886, and was first introduced to people two years later. In 1955, it was designated as a natural treasure by the Government of the Ryukyu Islands. (Designated in 1972) 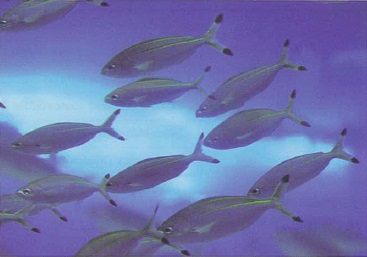 Prefectural fish : Banana Fish
(Takasago, locally known as Gurukun)
Caesio diagramma
This beautiful and colorful 25 cm fish is everyone's favorite. It is a tropical fish and lives in the warm waters from Okinawa to the Indian Ocean. Banana Fish are caught all year round and the total catch has increased every year. It is Okinawa's major fish product, and the majority are caught using the islands' own drive-in nets. Banana Fish are showing up on the dinner tables of Okinawan families more and more as one of the few kinds of fish eaten by ordinary people. For these reasons, it was designated as the prefectural fish. (Designated in 1972)

Song of the Okinawan People

Lyrics : Seiko Miyazato
With the cooperation of: The “Song of the Okinawan People” selection committee
Music : Shigeru Shiroma

Return to top of page