Karate originated here in Okinawa.  Over the years, it has been refined and spread to mainland Japan and the rest of the world.  As of now, it is said to have 100 million enthusiasts around the world.

In fiscal year 2016, the Okinawa Prefectural Government will open the doors of the Okinawa Karate Kaikan.  This facility will serve to inherit, preserve, and develop karate`s role in traditional Okinawan culture and tell the world that Okinawa is the birthplace of Karate.

The Okinawa Karate Kaikan will be constructed in Tomigusuku City, located in the southern part of Okinawa Island, on hills that are connected to the ruins of Tomigusuku Castle, which offer a panoramic view of Naha city.  In addition, it is conveniently located near the Budokan (Prefectural Hall of Martial arts) and Naha Airport.

The 3.8 hectare site will contain three main buildings; 1) the Karate Dojo (the Martial Arts Dojo), 2) the Karate Museum (tentative name), and 3) the Oku-no-in (Inner Sanctum) (tentative name), built with red tiled roof that symbolizes Okinawan tradition.  The Center will also boast a training room, seminar room, dining space, and a karate equipment store.  We hope that people from all around the world will come to love the Okinawa Karate Kaikan and see it as befitting of Okinawa karate`s cultural heritage.

Every year, the Okinawa Karate Kaikan will hold a traditional Okinawan Karate Kobudo International Seminar, held at the Prefectural Budokan from 2013-2015.  This seminar is an excellent opportunity to learn about the essence of traditional Okinawan karate directly from Okinawa`s resident masters.  We welcome visitors from all over the world to come and see the Okinawa Karate Kaikan, and we look forward to seeing you soon! 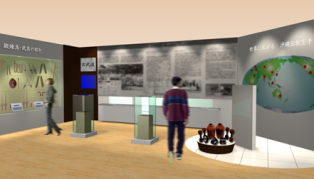